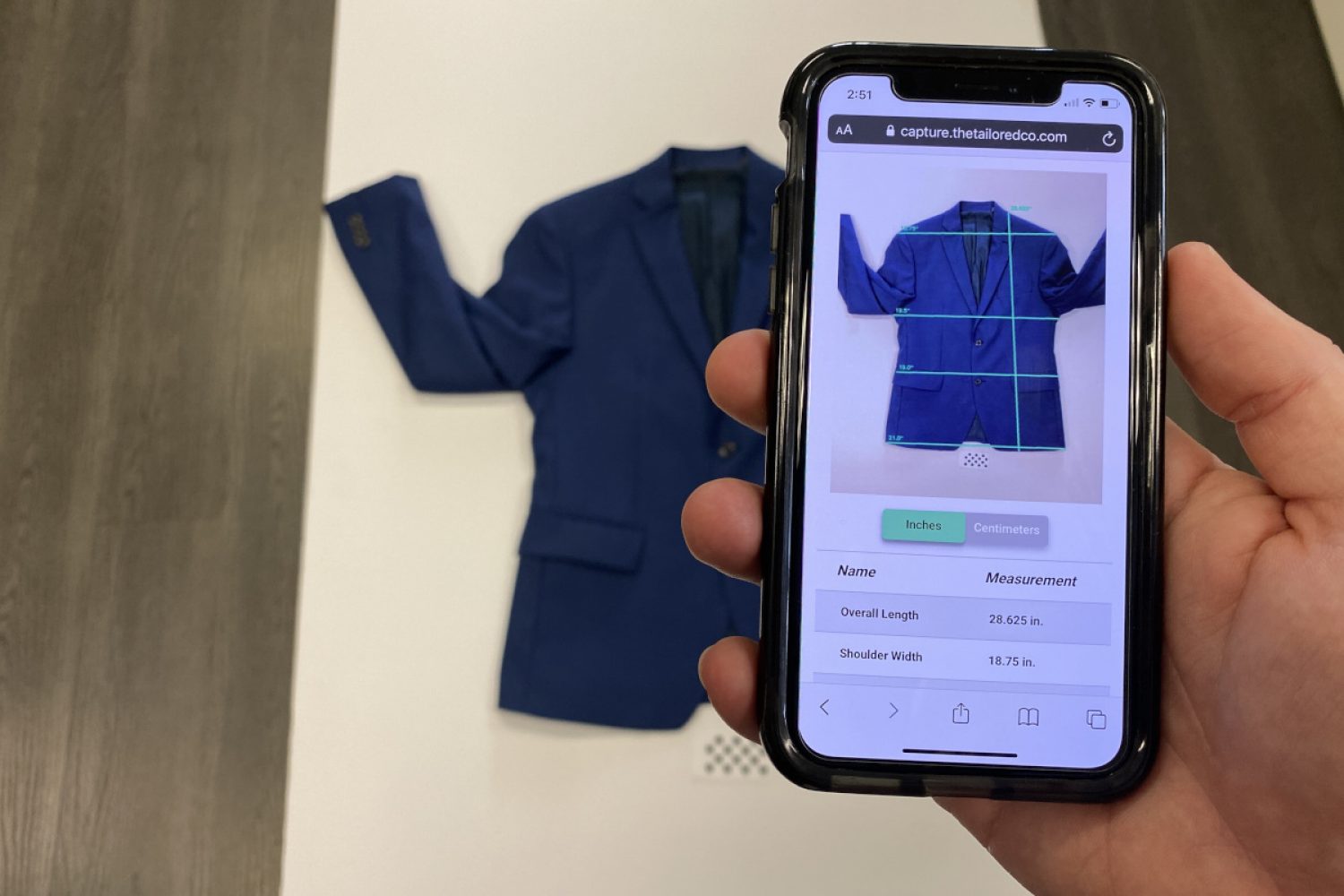 If you ever wanted a way to measure a garment without a measuring tape, we created it. Our innovative app, named Capture (get it free for 14 days here), measures clothing in photos (scroll below for a quick demonstration video). It’s a first of its kind app that eliminates the dreaded task of measuring clothes by hand. Simply take a photo of a garment, laid flat, with your mobile device and Capture instantly measures the garment. Now a task which used to require 3 minutes or longer takes less than 10 seconds. Capture is the only complete app for clothing measurements on the market today.

Let’s get into how it works.

How An App For Clothing Measurements Works

Recording accurate measurements is key to many facets of the fashion industry. The problem is this task has always been reserved for humans. It’s mundane and rarely do two humans perform the task the same way. This leads to errors in manufacturing, QA and e-commerce. Brands and retailers are continuously looking for ways to add automation into their processes and eliminating manual measuring is a logical progression. 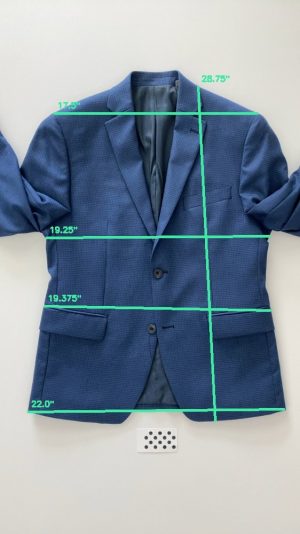 Capture is a patented technology that analyzes pictures of laid-flat clothing. It’s designed to capture the critical measurements of a garment – which are known as the measurements most important to fit. Tailored has devised specific garment positioning rules in order to achieve the most measurements through a single photo. For example, in the photo of the sport coat, the arms are splayed up and away from the jacked body. This to allow Capture to accurately recognize the underarm seam. Multiple measurements are derived from locating the underarm seam, thus nailing this is important.

Capture’s algorithms analyze a garment and instantly transmit measurement data back to the user. Because it operates in the cloud, a photo could be taken at a warehouse in San Francisco and instantly viewable by someone in New York or Bangladesh. By reducing the amount of time teams spend on measuring and garment analysis, and improved time to market can be achieved.

How Does Capture Achieve Accuracy? 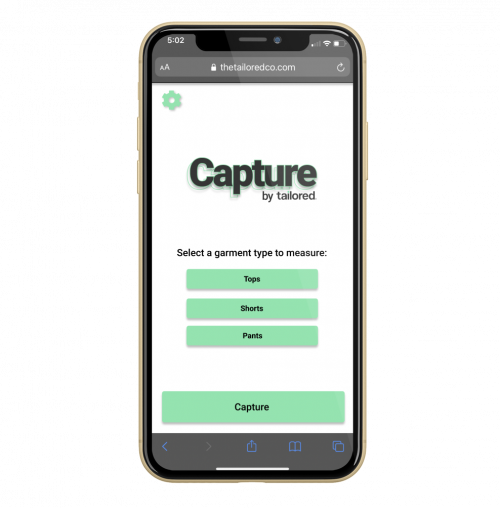 There are many objects which can be used as a reference item. As long as the item has known dimensions (eg: drivers license, dollar bill, sheet of paper) it can be used with the Capture system. The default object is a dot-pattern card as show in the jacket photo.

In addition to the reference item, Capture deploys a multitude of digital techniques which improve accuracy and consistency. The first is their garment overlay. Similar to photographing a bank check for deposit, Capture shows an outline of a pair of pants or a blouse to help users line up their photo. Additionally, the Capture app forces the user to position their mobile device parallel to the garment. This reduces any chance of perspective, which would introduce errors into the measuring step.

Capture has been in R&D since Tailored was founded back in late 2017. The team has met with over 100 global fashion brands and clothing resellers. They’ve piloted with companies like Stitch Fix, Levi Strauss, Le Tote, Goodwill, FarFetch and others. All this to say the team at Tailored understands the market and the problems they hope to solve.

The first task was to create a software that didn’t require the downloading of a mobile app. Apps were once considered the future of the mobile experience. We now know there is a limit to the number of apps consumers are willing to download and use on a daily basis. As long as a user has access to a mobile device (newer than 2016) with with a camera, they can access and use Capture.

Once a user sets up their account and selects their subscription, they’re ready to point and shoot. The app flows smoothly, first by asking users which garment type they’d like to measure. Instructions are shown depending on the type selected, then users move to the photo screen.

Perhaps the most important feature within the Capture measuring app is accessing the measurement data. There are two ways this is accomplished. Within the app itself, the user is given the option to download or email the data via JPG or PDF. Through their Capture subscription, users are also given access to a web portal where they can view all images. Here users can download individual images, download in bulk, or even download a report in CSV format containing measurement data. 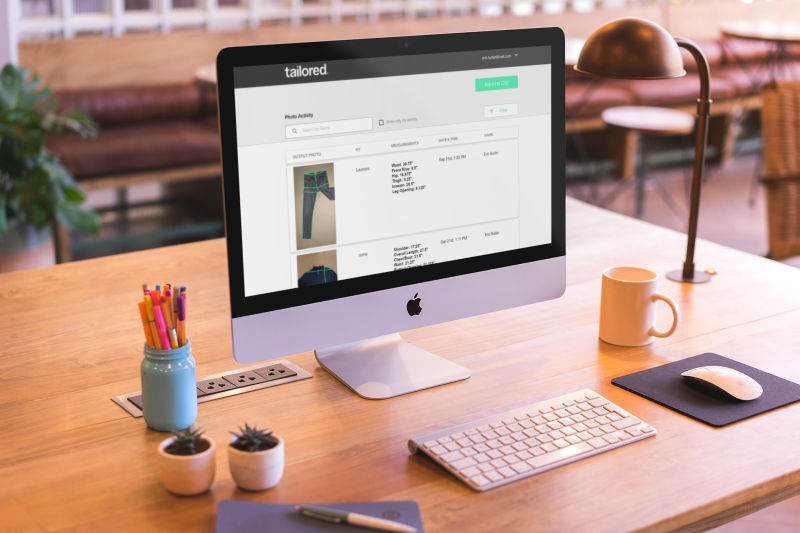 One of the most unique features within the Capture app allows users to make edits to measurements which may not be 100% correct. This is also done via the online portal.

Simple Integration, No Down Time

Above and beyond the simple web app available to anyone online, Capture can also be white labeled into most online stores through our API. Given that Capture is a web-app, there is no requirement to download an app. Simply type the Capture URL into the browser on your phone and you’re ready to photo-measure.

Additionally, Capture will can be used to help in quality assurance and online listings as in the clothing resale industry. Our platform comes standard access for tracking garment photos and measurement data. This data can be easily exported through various formats. Capture can also link directly to your PLM or other systems through our API.